Back from the Avian Vet

We’re back from the vet.

Here’s a photo of me on the scale after I was toweled (for getting my blood drawn, my heart listen to, my throat looked down, my vent examined and just generally *violated*!!). Not only did I not like being manhandled, but look at how messy my feathers got!!

But the vet said that I was very well-behaved and that I’m well socialized because I barely squirmed and didn’t yell or bite or anything.

Bloodwork results will be in next week, but the vet says the results of the physical all indicate that I’m healthy. The only thing my human was a little concerned about was the weight I’ve gained. I weighed in at 218 grams, which is perfectly normal for a white-capped pionus except that this is 10g more than last year (which in turn was more than I weighed the year before). The vet, however, said that my diet seems fine and he wasn’t that concerned. I’m just not supposed to gain much more weight.

Given that my diet is fine (so says the vet), I either need to eat less or exercise more, I suppose.

Who is that!? Is that the Baby Bird? 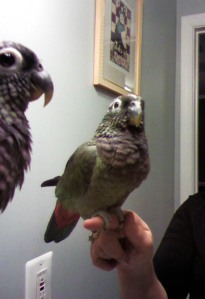 Who's THAT in the mirror!?

My human has been so busy lately that she hasn’t been able to spend as much time with us as we’d like. But she’s on vacation for a week, which means we will get lots more time with her.

But… lots of time at home can sometimes coincide with reappearance of … The Kissing Monster! (*gasp*) It doesn’t happen often, but when it does… the horror!

When I’m hanging out on her shoulder, sometimes she asks me to “step off”. But sometimes I don’t wanna step off and she warns me, “be careful, or the Kissing Monster might come out.” Then, if I don’t step off …. (*shudders*)

Then mwahmwahmwahmwahmwahmwahmwah… there are kisses raining down on me all over! They follow me until I run down the human’s arm and don’t stop until I’m safely back on my perch. And I thank my lucky stars I was able to escape the Kissing Monster by the skin of my nares.

But two seconds later I’m begging to be picked up again. Sometimes hanging out on my human is worth the occasional risk of running into the Kissing Monster.

Do you enjoy running around the floor? We do! Of course, there aren’t any four-legged animals living with us.

We had a nice little adventure wandering around the floor this morning. That is, until we heard some birds calling outside and decided it was best to return to the safety of the bird room as soon as possible. (That means flying. We fly MUCH faster than we walk.)

A little light in my life

I’ve been asked to relay to pis everywhere that you should not try this at home.

But, finding unusual places to perch is kind of a specialty of mine.

I was not allowed to stay on this perch very long. It looks really good with my coloring though, don’t you think?

The weather outside has been absolutely beautiful lately!

I really like going outside and feeling the breeze ruffle through my feathers. It’s true that there are some weird things outside. Flying insects do not impress me. I’m wary of the other birds outside, too, even though I enjoy watching them through the window.

Gillie and I are only ever allowed outside in our carriers. We’re both fully flighted and fully confident about flying. We have a harness and a flight suit and while they are fun to chew on, we’re not interested in wearing either just yet.

Maybe someday we’ll have an outdoor aviary. In the meantime, however, I do like sitting outside in the carrier and soaking up some rays with Michelle nearby.

Gillie and I haven’t been posting much recently, and apologize for that.

We’ve actually moved to a different place with our human. For some reason, she’s not as interested in drilling a lot of holes in the ceiling to recreate our play room. But, at least she bought us a Kings 502 play gym and hung some ropes between it and our cages!

Take a look! It works pretty well, I think! 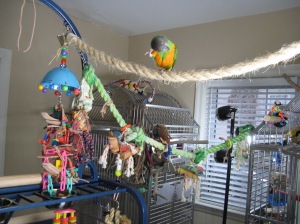 Pay no attention to the guy in the orange vest 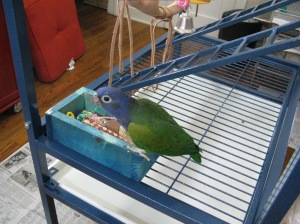 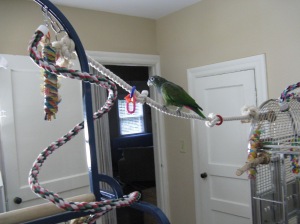 Sprouts are Okay… But Plastic Lids are Awesome!

The human prepared sprouts, but was out of clean stainless steel cups that she usually serves our food in… so she put my sprouts on a plastic lid and left it for me on top of my cage.

She went back into the kitchen to fix Stewie’s portion and when she came back she noticed I had a new method for serving myself.

I quickly managed to dump all the sprouts all over the floor as I entertained myself twirling the plastic disk around in my foot.

We’ve made a breakthrough! Late last year I posted that I knew how to play the target game, but that I was confused about the next trick I was supposed to be learning.

You see, there’s this pink ring that my human would give to me, but that she didn’t want me to play with. She would hand it to me, and then hover with her hand waiting for me to drop it. Then she’d give me a treat when she caught it.

The problem is that she appears to be clumsy or lazy… because she stopped doing such a good job catching it. The sequence started: she’d hold the ring, I’d beak it, she’d give me a treat. Then I started grabbing the ring so I could hold it. That earned me a treat. Then she tried to take it from me in exchange for a treat (huh?). Then I realized that I’d get a treat if I just took the ring and dropped it. She always knew to catch it.